Tours are year-round, any day of the week. They must be booked in advance! robberscavetours.com

2019 Nebraska Book Award Winner Robber’s Cave: Truths, Legends, Recollections is on its 45h printing since 2018. It describes the infamous and mysterious landmark cave beneath Lincoln, Nebraska, that has been recently named to the National Register of Historic Places. Author Joel Green is the cave’s only tour guide and leads guests from all over the world through the tunnels year-round. $14 adults, $7 kids 6-12, $3 kids 1-5. Tours sell out quickly and must be booked in advance by contacting Joel at [email protected] or 402-975-0598. 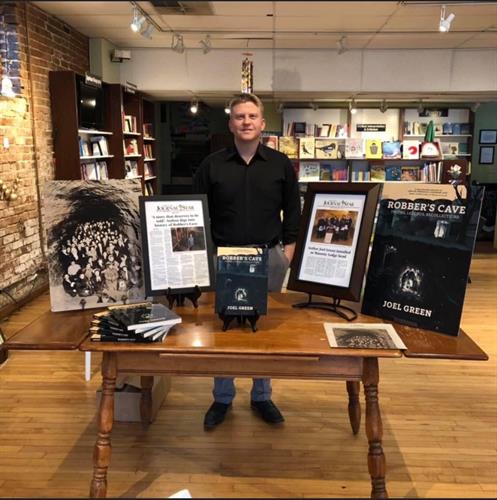 Green has traveled the Midwest promoting his book and the Robber's Cave Tours. 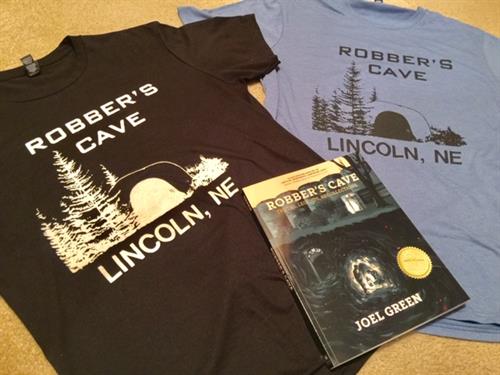 Look for a copy of the Award-Winning Robber's Cave Book or a retro 1986 T-shirt! 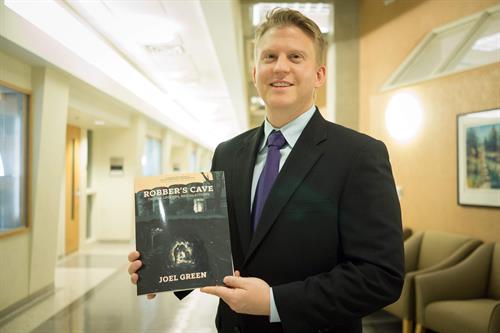 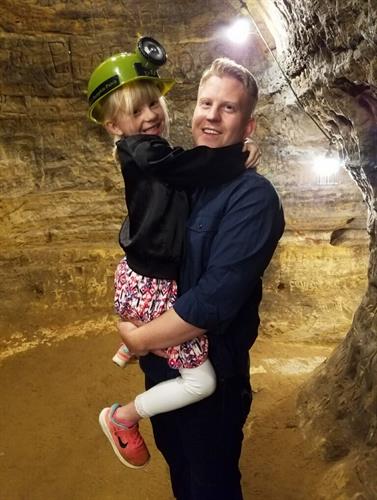 Green, and at times his daughter Brooklyn, give tours of Robber's Cave year-round, seven days a week! 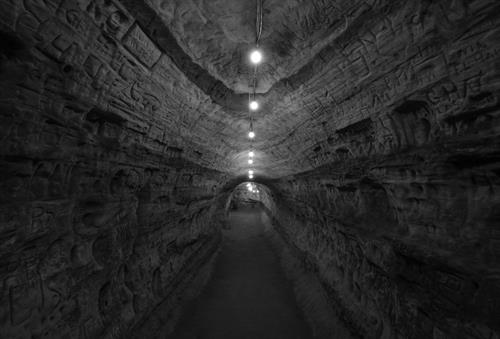 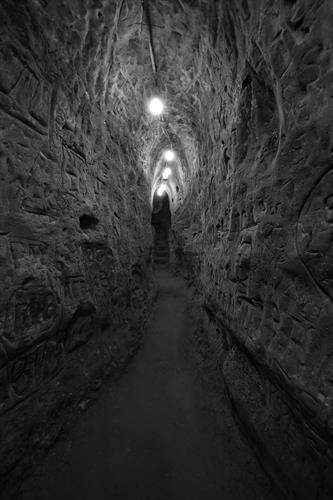 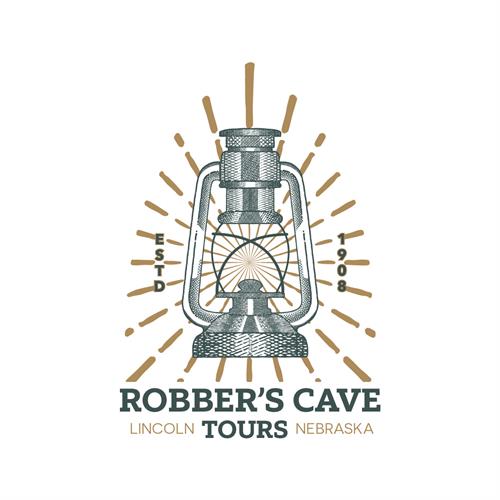 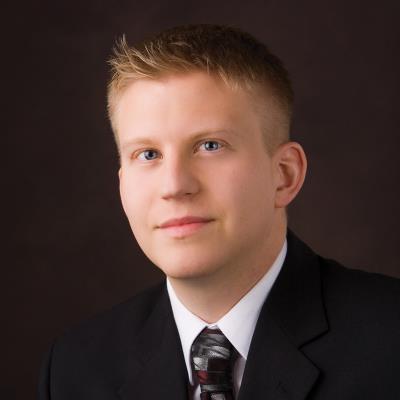 Joel Green, a 2019 Nebraska Book Award-winner, had been collecting information about Robber’s Cave for years before he decided to finish this book for Nebraska’s 150th anniversary. A Lincoln High School alum, Green became the first in his family to graduate college. He worked for NBA Hall-of-Famer Harvey Pollack of the Philadelphia 76ers, and then became an associate editor for the Cleveland Cavaliers. Green mentors highly gifted students in writing for Lincoln Public Schools, and he is very involved in Lincoln’s community as a Freemason and Lakeview Elementary School volunteer. He is a two-time recipient of the VFW Citizenship Education Award. He lives in Lincoln, Nebraska, with his wife and two daughters. He continues to give public and private tours of Robber’s Cave when he’s not teaching.

GROW Nebraska® is a nonprofit 501c3 providing training and education to Nebraska businesses.

Do you take credit cards? Do you want lower credit card processing fees? We have a merchant program with risk free comparison options that can save you money.
×

In the prior PRIME grant, GROW Nebraska® purchased technology equipment for 50 low-income participants and began an intensive training program to teach them to use the technology effectively. The current grant extends that training and allows those who came in at the end of that project to receive additional training as well as bringing in new low- and very-low-income entrepreneurs and small business owners for exceptional training and market access services.
×

Through a Google AdWord Grant, GROW Nebraska® offers the opportunity for members to explore this feature at no cost, which can be a great addition to your marketing plan. Google AdWords is an online advertising program used to create ads to reach people that use the Google search tool, who are looking for specific products–like yours. All ads run through the GROW Nebraska's BuyNebraska.com eCommerce site.
×

MarkeTech is more than a conference. It’s cutting edge training, valuable networking, and a technology showcase. Be inspired, be engaged, and work hands on with today’s most innovative tools. MarkeTech provides organizations with tools and ideas advancing their businesses through collaboration between marketing and technology. As a member, save $100 on registration, learn more at www.marketechconference.org.
×

Twice a month, on the third and fourth Thursdays, GROW Nebraska hosts free, open-to-the-public trainings. Participants can tune in from any location where they have phone or internet service. Each month GROW Nebraska® features different presenters and topics related to marketing or small business.

Visit our training page for information on future training dates and topics.

Need help getting on Facebook, Instagram, Pinterest, Twitter, LinkedIn or Google Places?  We offer free individual assistance to get you started in the social media world. This can be a valuable addition to your marketing plan. We will also post or repost information about your business on our social media platforms to make our followers turn into your followers, too, and you can feature videos about your business on our YouTube Channel.
×

GROW Nebraska® offers a series of workshops focusing on technology and marketing for entrepreneurs. In today’s chaotic world, it is easy to get distracted by advertising proposals that derail our marketing budgets. Attending these workshops gives you a firsthand look at marketing and technology methods to increase the success of your next trip. Business owners, community leaders and marketing staff can accelerate their skills with a small investment of time and money.
Find out more about our upcoming workshops
×

We pride ourselves in communicating with our members about what they need and want. This service includes an initial consultation and as many follow-up conferences as each member desires. "GROW Nebraska has provided marketing leads and encouragement to expand my markets." -Sharon Walde, Heirloom Treasures "GROW Nebraska helped me find my niche in the market. I've been really happy with the services and opportunities that GROW has provided for me." -Ima Gene Mason, Im's Countryside Painting
×

With the help of our ecommerce sites, our GROW Nebraska® members benefit from a strong web presence. Sell your products through our online platforms including BuyNebraska.com, Amazon and Ebay.
Shop Local
×

Members are able to join our Mark It to Market UPC program. ($25/code with $5 annual renewal fee)
×

GROW Nebraska members have opportunities to sell their products at our Kearney retail location on the Younes Campus, in pop-up stores and at the Nebraska State Fair.
×

GROW Nebraska® is very active on social media, and we use these platforms to reach thousands of fans and followers with information about our members. Read our blog and connect with us on Facebook, Twitter, Instagram, Google+, LinkedIn, Pinterest, YouTube, and Snapchat.
×

Through our market testing program, you can take advantage of mall and airport traffic that you otherwise would not have access to. You can set up a table or have a trunk show any day of the week at our Kearney retail store. You can offer samples or just talk about your product to potential customers. Customers want experiential shopping; they want to meet the artist, author, designer or manufacturer. Think about it like a farmer's market or craft show but without the booth fee! It is a great opportunity to launch a new product, get feedback on a current product, and build your brand.
×

Every GROW Nebraska® member will receive a "Proud Member of GROW Nebraska®" sign to post in their retail location, office, home or booth.
Request Photography
×

GROW Nebraska's connections offer members the opportunity to take part in valuable promotional spots on television that have a statewide audience. The cost of these spots would be prohibitive for small businesses, but GROW members can be featured on the NTV Good Morning Nebraska television show through the GROW Nebraska® spot at no cost. Being featured on these shows gives GROW Nebraska’s clients state-wide exposure and helps them brand their name and product. Thousands of potential customers listen to these shows. This is a media that is effective, and thanks to GROW’s efforts, members can access this remarkable marketing asset at no cost.
×

We provide all of our members with a webpage within our website. It's easy for members to update with the latest information, videos, photos, events, and job openings. This platform for the webpage is a powerful successful tool for search engine optimization (SEO) and is key for small businesses looking for exposure in today's marketplace.
×

In the age of online shopping, stunning product photos are more important than ever. GROW Nebraska can help you make your products shine with professional photography.